Beach under the Apartments Danijela

Apartments Danijela are situated just 40 m from the crystal clear sea and they are perfect place where you can enjoy in all the beauty of the Adriatic Sea. Natural mild coastline is ideal for sunbathing and if you prefer to stay in shade, pine trees who are near the sea are ideal for your pleasure. Shallow sea bottom in the entire bay Lumbarajsko Racišće is the guarantor of pleasant feeling while swimming. West side of bay Lumbarajsko Racišće where are Apartments Danijela is protected from west summer wind Maestral. There are the steps with handrail for enter the sea. If you have a boat there are several places where you can anchored.

Pod vodu beach is situated just 300 m from Apartments Danijela. This beach is ideal if you want to enjoy without the crowds. Beach is 2 km long. There are many places where you can relax by lying on the flat stone rocks in the shade of pine trees. Mild and gentle coastline provides a nice entry into the sea. The sea bottom is shallow and gentle. People who like to enjoy the sun and sea without the crowd as nudists, especially love this beach because the beach is an intimate place for everyone. The beach is at a walking distance from Apartments Danijela so the guests who stay in our apartments especially love this beach. Beach offers beautiful views of the surrounding islands. Islands ( Badija, Kamenjak, Planjak and Vrnik) who are surrounding this beach give you the impression that you are in natural swimming pool.

Vela Przina is the biggest natural sandy beach in Lumbarda and the entire island of Korcula. Beach is located on the south side of Lumbarda, just 2 km from Apartments Danijela The beach is placed in a large bay, and faces open sea and island of Lastovo. It is very popular, many people from all parts of the island come here to enjoy in “silky” sand and clean sea. Best way to come here from Apartments Danijela is with car our with bus. Bus who drive from Korcula-Lumbarda stops on the end 200 m from the Przina beach near the Sv.Križ Church. Afther exiting the bus you need to walk through the vineyards of the famous wine GRK to the beach. Another facilities on the beach: large parking place (price ~ 1.5 euros /day), small open air caffe/restaurant, sandy vallyball playground.​

Sandy beach Bilin zal is located on the north side of Lumbarda, 2 km from Apartments Danijela, opsite to Pržina beach, with a view over Korcula Archipelago and Peljesac Peninsula.This beach is created for people who love sandy beaches, clear waters and not so big crowd like on Vela Przina beach. This beach is well visited by tourist cruisers ships who are passing through the Korcula Archipelago. If you are staying in Apartments Danijela best way to come on this beach is the same like for Vela Przina beach. There is two a small grill-restaurant in authentic dalmatian building, and parking place (~1.5 euros/day).

Although Lumbarda is famous by its natural sandy beaches, for those who like “wild” beaches Lenga Brendana is a perfect place. The beach is about 1 kilometer long, rocky coast line with many isolated spots, surrounded by pine trees. The sea is clean and sea bed ideally for snorkel diving. It is placed on north-east part of Lumbarda, from beach Bilin zal to eastern endpoint of Island of Korcula, cape Raznjic. It is possible to come here by car, which you can left in pine forest.

Pupnatska Luka Beach is a beautiful pebble beach with clear water in the bay of Pupnatska Luka , some 20 km away from Apartments Danijela. If you don’t have your own car, there are few times a day bus service from Korcula to Pupnat (village nearby) which one can use to reach this popular swimming spot. Alternatively, you can rent a car, scooter or bicycle to go for a day trip in Pupnatska Luka. There are couple of restaurants in the bay for food and refreshments. 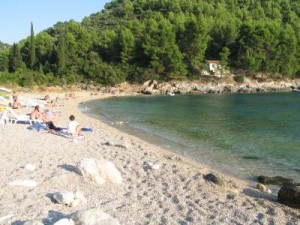 The island of Vrnik is the only inhabited island in the Pelješac Canal archipelagos, and is accessed from Lumbarda by small boat through the narrow channel separating it from the island of Korcula. Apartments Danijela are just 200 m far from channel Lumbarda-Korcula and this channel is just 99 m long so it is possible to swim there. The historical settlement is all but abandoned during the winter, while during the summer it hosts many bathers and adventurers who are attracted by the blistering pebble beaches formed by centuries of wave action on the rock remains originating from the quarries located on the islands. Rock from these now abandoned quarries and skilful local stonemasons have made Vrnik famous in many Adriatic towns, as well as European and world metropolises. Many palaces in Dubrovnik, Venice, Vienna and even Washington have been built using Vrnik stone. If you come on this island we recommend a visit to the old quarry where stone was exploited in Roman times.

The island of Badija is the largest of the twenty-two archipelagos of islands between Lumbarda and the peninsula Pelješac. Located in its protected southern cove is a Franciscan monastery and church built in late gothic style and dating back to the mid 14th century. Special attention should be given to the beautifully preserved gothic-renaissance large cloister square completed in 1477. The monastery has recently being returned to the Franciscans having being expropriated in 1950 and used as a sport tourist centre. It has been renovated in the traditional “perdun”, when Catholics on the 2nd August in many boats of all sizes make a pilgrimage to St. Mary of Škoja seeking forgiveness. Trip, swimming or diving on island Badija like on all others islands in Korcula archipelago is possible with boat our even swimming there because apartments Danijela are very close to all islands in Korcula archipelago (Badija, Vrnik, Planjak, Sutvara, Majsan, Stupe vele, Stupe male, Sestrice, Bisaće, Kamenjak, Baretica…). Beach on the north side of the island Badia is very popular among nudists. One part of the beach is sandy and other is rocky.

Planjak (pronounced Planyak) is a small island located right across the sea from Island of Badija on the way to Island Vrnik. This island has some very nice swimming spots along it’s shores. The most obvious one is on the Western part of the island, easily spotted when approaching the Island from Korcula Old Town, where very narrow pebble beach can be found. More interesting one is on the Eastern part of the island, facing Vrnik and Sestrice Islands. This unusual beach is somehow hidden from the eye as it is carved in the large stones. As this part of Planjak is open to southern wind Jugo, large and small stones are eroded by force of strong winds, so pebbles are perfectly shaped, white and clean… The bottom of the sea here is also interesting as there are a lot of these large pebbles scatted around deep green sea making this tiny spot ideal for snorkeling too. Planjak is very popular among locals for weekend day-trips and picnics, so you have to come early to get this little swimming spot all for yourself. Recommended transport to Planjak : Water Taxi Boat our rent boat.

Sutvara is island located north-east from Apartments Danijela. It is an unpopulated island. There are old quarries on the island of Sutvara too, as well as vineyards that belong to family form Lumbarda. There is also a pebble beach on the western side of Sutvara, suitable for children. This beach is favorite for the boaters. On the south side of the island, under the old stone wall is beautiful small pebble beach. Near the beach are flat rock stone ideal for resting. Recommended transport to Sutvara : Water Taxi Boat our rent boat.

Gubavac is island located at the very entrance of bay of Lumbarda very close to Apartments Danijela. It is attractive little island with weird shape and lot of large, flat and smooth rocks that are very comfortable to lay on. That is why swimmers and sunbathers like to spend days here, especially at the eastern side of the island which is well sheltered from western wind Maestral that blows in summer afternoons and can be bit annoying if you are not into sailing and windsurfing.

Majsan was inhabited since prehistoric times until the Middle Ages. There is an early Christian church on the Majsan from the 5th century. These early buildings / ruins are still visible on the western coast of the islet. Remains proving that there was life here from ancient Greek times to the early Middle Ages can also be seen on the other islets of this group. In 1000 year, Venetian doge Petar II Orseolo lead his conquest of the south Dalmatian archipelago and the town of Dubrovnik from Majsan. Near Majsan is island Stupe where is a restaurant, ideal for nautics. To visit this island take a taxi boat our rent a small boat. 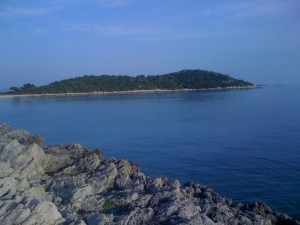 Stupe are two small islands, one much larger than another, that are located at the further East of Korcula archipelago. On the largest one, named ” Vela Stupa” , there is a small konoba restaurant that is conveniently situated for visitors to to enjoy food and drinks. This small restaurant, run by local family (Curać), has reputation as a good place to eat. Stupe is also popular with naturist ( people that like nude swim and sunbath) who come here in summer to enjoy sea and sun. Mala Stupa (smaller Stupa island) is known among locals as place where you can go to jump to the sea from the tall rock which is stands above the water and can be easily climbed to jump down. To visit this island take a taxi boat our rent a small boat.

Sestrice – twin islands called ” Vela Sestrica ” and ” Mala Sestrica” (Large and Small Sister) The lighthouse on the island of Vela Sestrica was built in 1871 by Autro-Hungarian Empire which used to be home of lighthouse master and his family until very recently. The buildings is now deserted as navigation lights are automated. This two islands are intresting for nautics. To visit this islands take taxi boat our rent small boat.